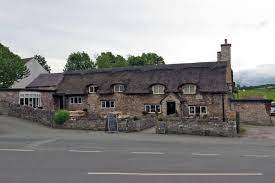 An historic and beautiful inn, set within the heart of, Henllan, near Denbigh, a lovely village among the hills of North Wales. A Grade II listed inn that has origins that date back to 1229 and is possibly one of the oldest inns of Wales. With a thatched roof and casement windows, it squats lovingly within a slight dip on the edge of the village, with rolling fields beyond and the ancient church opposite. It certainly has a look of being haunted; and you would not be disappointed.

There are a few ghost stories attached to this building, but I prefer to come in cold, without knowledge; however, on this occasion, I had previously heard of a woman seen within the building and was believed to have been a previous owner, who was strangled by her husband in a jealous rage, having found her in the arms of another man.

Now, I investigated this inn four years ago for another book project, and during the few hours spent in the inn during the day with staff members as witnesses, we certainly had a few ‘odd’ moments. The sounds of barrels rolling above our heads from empty rooms, and the sounds of humming from the fireplace that was heard by most of the group. Flashes of shadows witnessed by some and a few other unexplained happenings, which made some sense now that I have returned with, Paul, the Science guy.

And so, we began in the ‘Pool Room’

Sensed the name, ‘Ellen’ landlady, and a ‘Mr Turner’. (I will be researching these names)

Spoke with both these people at length. We had plenty of interaction from Paul’s box that only makes sounds IF there is contact between it and energy. We caught noises responding to my questions and on my phone recorder I can hear what sounds like humming and a sigh. Half way through the session, I ask a question, ‘would you like to tell me about your life, Mr Turner? Two words can be heard, but as yet, I cannot fathom what they are.

Moving to the middle Room, Mr Turner is stronger here and orbs are seen moving through me and beside me. The sound of a deep voice, what can only be described as ‘horses hooves’ and a loud bang are experienced in this area.

Within the lower bar, I can hear a loud ‘squeal’ on my recorder and when I ask, if anyone needs help, I will help you, a faint, ‘yes’, is picked up.

Moving to the upper bar, Paul’s box is responding to my questions and observations with very loud high pitched noises, which proves to us that energy is interacting with it.

Within the couch area, I witnessed a dark shadow move across the back wall, but unfortunately, we were just setting up the cameras so nothing was captured. I ask why my legs are aching, and a low voice is heard on my recorder in answer, but unable to determine what the word is. Abruptly there is a loud, ‘rat-at-at-tat’ sound like loud knocking trays or something. At this point, Annie was outside with her friend. I hear a shout like, ‘oi’ but unsure if inside or outside.

Moving to the restaurant area, I can hear on my recorder, a male voice saying, K….. and then a sigh followed by an array of odd noises which I cannot fathom what or where they come from, but some sound like mumbling voices.

Within the kitchen area I am aware of stagnant energy which makes me quite dizzy, and on my recorder, I am sure I hear a voice speak beneath my own in answer to a question.

NB:We have since returned for a night-time investigation. I will report on any findings once I have gone through the footage.

To really get a sense of what happened during our investigation, check out our Youtube channel, The Medium & the Science Guy

‘It’s well worth a visit for a great pint of craft beer and a delicious wood-fired sour-dough pizza, along with the atmosphere’